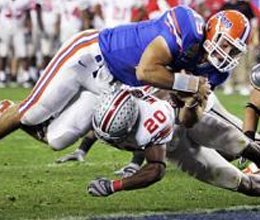 Bettors no longer have to look at mere sides and/or game totals to strike it rich as mostly all the online sports books (and many Las Vegas) outlets provide first and second half wagering lines along with quarter by quarter prices too on football betting.

Suffice to say, many NFL football betting players have found a real comfort level with playing these games-within-the-game and our “Beating NFL First Quarter Lines” story will clue you in on how it can become an extremely profitable wagering category and we’ll drop more than a few hints on what to look for, when sizing up 1st Quarter wagers.

Okay, so maybe it’s just stating the obvious, but if you can catch the Indianapolis Colts or the New England Patriots, let’s say, coming off a less-than-stellar performance the week before, the odds are that a real firm/tough week of practice will have these A+ teams in a rock-n-roll mood to start the next game.

The Colts, in fact, have been one of our favorite First Quarter sides the past two or three years and it sure helps that quarterback Peyton Manning is a stickler when it comes to pre-game preparation, as often he leads his Indianapolis offense to a score on its very first possession of a game.

P. S., we’ve found that the Colts are even a stronger play in First Quarter bets when playing at home where the domed stadium crowd can spark Indy’s defensive efforts and thus give immediate momentum to the Indianapolis offense in those instances where the Colts must kick off to start the game.

DEE-FENSE, DEE-FENSE (PLUS POINTS, OF COURSE)

One of the great things about placing an NFL First Quarter bet is that you often times get the superior defense plus a point or two and that means – more times than not – that strong defense must make only one or maybe two stands to keep the opposition off the scoreboard and thus allow you to cash your play.

As NFL First Quarter bettors know, many times the point spread on the opening frame is 1 1/2 or only 2 points and so a well-prepped defense can throw a first-quarter shutout and thus allow you to snag the win at the betting window.

Let us take you back to an NFL Week 12 game played last in 2007 at Heinz Field in Pittsburgh between the visiting Miami Dolphins and the host Steelers.

The torrential rains had turned this already shoddy grass/dirt surface into an absolute quagmire and it was apparent to anyone listening to those “Doppler” folks that this particular Monday Night Football game was going to be a real defensive slug fest with both offenses likely to stammer and stutter all night long.

Naturally, the over/under game price for the Dolphins-Steelers clash came crashing down, but you could have jumped into the fray 15 minutes before kickoff and still gone “under” for the first quarter and been reasonably sure that both teams were in trouble on offense (plus you know it’s going to take some snaps for the players on both offenses to try and get their footing down).

The game ended with Pittsburgh winning 3-0 – a second-half field goal by the Steelers won it – but the bottom line is knowing any/all treacherous field conditions can put you on the fast track to a first Quarter “W” when it comes to the totals.
STUDY A TEAM’S POST BYE HISTORY

Folks, you don’t just get “gimme” wins in this business of NFL betting – nothing is handed to the hard-working handicapper and so you have to do some prep work of your own. Here’s an interesting angle that could well net you a real windfall.

Go back the past three or four years –that’s it, no reason to trace back to the 1980s here – and discover what NFL teams either thrive or struggle in first quarters of their post-bye games.

It’s very likely that you’ll find a real pattern with at least a few NFL teams, as maybe some will dart out of the starting gate and score right away and yet others could need time to get into their post-game against sides in first Quarter bets.

CHECK THE SCHEDULE – OF COURSE

Here’s what we mean here:

If an NFL team just finished playing back-to-back-to-back divisional games, it’s quite unlikely that team will be a quick starter the next time out.

If you can go against one of these teams that just played three successive divisional outings then don’t be shy about making a strong I st Quarter play against ’em here.

Conversely, if you’ve got a team that’s coming off a couple non-divisional games in a row and now is playing against a divisional rival, it is merely common sense that the team will have a real focus and a positive mindset to get out of the gate quickly and so they would become top-notch 1st Quarter plays.

Folks, nothing is etched in stone when it comes to betting on or against teams in the 1st Quarter of NFL games, but you can beat the books to the punch by following the rules above and even having your own set of rules that have worked for you in the past.

Do your homework even before this NFL ’09 season swings into high gear in September and you’ll find that banging out some big-time profits, after just 15 minutes of game action might just be right for you.