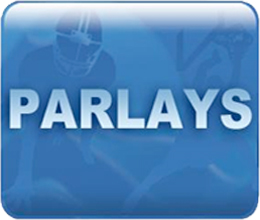 Parlay betting provides one of the best ways for recreational bettors to add a buzz to an average betting day. But is it possible for those parlay tickets to net a significant payout?

Everybody has seen it before. Some guy at the bar goes bananas. He’s clutching a ticket like it was the Vince Lombardi Trophy and handing out high-fives as if he was a member of the Fun Bunch. Only one thing can make a grown man go this slaphappy on any betting day: a winning parlay betting ticket.

These bets are the stuff of legends. When they pay out, they do it in style, giving bookmakers ulcers and providing a Trump-sized payday and life-long bragging rights to the lucky schmuck who makes the winning picks. And there’s no better time for parlay betting than on an autumn Sunday. With 16 NFL games going down each week, bettors can focus on a single sport, rack up a huge bar tab and pay it off with the winnings all the same day. It doesn’t get better than that.

How’s this for a good day? On a Sunday in January last year, one NFL sports betting player, put down $500 on an eight team parlay ticket, hoping the last week of the NFL season would turn into his lucky day. He needed eight underdogs to come through and probably didn’t even want to know the odds of that happening. But it did!

After a wild day that saw the Browns, Dolphins, Rams, Titans, Packers, Saints, Bills and Bengals all cover, this incredibly lucky guy was $97,045.54 richer. And he probably hasn’t stopped talking about it yet.
LONG ODDS

But that, of course, is the deceptive thing about parlay betting. They always seem like the best bet in the house when somebody hits the jackpot, but more often than not the odds are stacked against us. Think about it. It’s hard enough to put together a string of wins on straight bets. So scraping together a series of winning picks all on the same ticket can sometimes be like hitting blackjack on ten straight hands.

Parlays simply put, is a betting term in which the more games you stack up on a ticket, the longer the odds of winning. Essentially, the odds start out at 3-to-1 for a 2-team parlay and swell to about 1,027-to-1 when you put in a 10-teamer. Players can use sides or totals and string together as many games as they like, increasing the payout with every additional game. Parlay betting is fun to play, but require a lot of skill (and luck) to come out a winner.

Most bookmakers we interviewed note that parlays are always one of the most popular wagers, especially during football season, and they are a great way for casual bettors to add excitement to an average Sunday.

“Parlay betting is more of a recreational bet”, one Bookmaker said. “Professional bettors usually don’t even look at them because you can’t make money over the long run. But for casual bettors, you are going to make six dollars for every dollar you put up (on a three-game ticket) and it’s fun way to spend a little bit to win a lot.”

And don’t think that the books are making a fortune on parlays. When a big ticket wins, the payout is significant enough to wallop even the big sportsbooks with a good shot on the chops. Last year was a particularly good year for parlay betting. There are often a few favorites that get on a good roll and kill the books week in and week out according to some bookmakers. If a smart bettor can recognize this and weave these “sure things” together with a few other good picks, parlay bets can make for a very profitable football betting season.

Some bettors like to combine totals with sides to improve their odds. Every so often, you’ll hear analysts comment that a team needs to play at a certain pace to improve their chances of winning. For example, you might hear ESPN’s Tom Jackson say, “If the Ravens can slow down the Cardinals and play a low-scoring game, they can win this game.” That should set off an alarm in a bettor’s head to hitch up a Ravens win with a play on the under.

This is especially lucrative when a team is heavily favored, but a relatively low total is posted on the game. For (an exaggerated) example, if a favorite is listed at -38, but the total is only 49, it wouldn’t be too easy for the favorite to cover and have the game wind up under the total.

These are just a few things to consider as you prepare for a thrilling betting year. All types of bets are sure to be popular in both NFL and college football, but if you are the type of person that enjoys a shot of adrenalin, you might want to think about making parlay betting a part of your betting ritual.